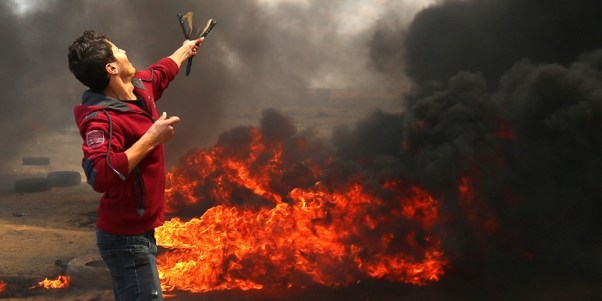 The Trump administration held a ceremony today in Jerusalem to mark the move of the U.S. Embassy from Tel Aviv to the ancient city.  Unsurprisingly, a mass swarm of protestors charged the border fence that separates Gaza and Israel, under the direction of Hamas, the terrorist organization that’s governed the area since its violent takeover from the Palestinian Authority in 2007.

Israel responded as you might expect any country whose borders were under siege to, by shooting the attackers, killing 58 and wounding over a thousand.  Multiple warnings were given days ahead of the shootings and it’s difficult to believe the border rushers didn’t know exactly what they would face.

Predictably, the usual suspects within the UN and Western press are blaming Israel, calling on them to “steady their response” and comparing Trump’s embassy move to a lit match that blew up the powder keg.

Don’t fall for this. I’m sorry that dozens of Palestinians were killed today and for the suffering their loved ones will go through  The blame for those deaths lies directly with Hamas and other terrorist groups though, who count on  human sacrifices to garner sympathy for their cause and paint Israel as the bad guy.  As Gaza implodes from within, Hamas needs something to shift the blame off its miserably inept and corrupt leadership.

From Jim Geraghty’s, When Will the Palestinians Start Holding Hamas Accountable?

“Yet Hamas is desperate. The situation in Gaza has become increasingly intolerable. Unemployment is widespread and chronic. Hunger is rampant. Water is undrinkable. Electricity is available for only two to four hours per day. Sewage treatment plants have failed, so the once-beautiful Mediterranean coast is now a repository of human waste. And there’s still no way in or out of the territory for almost all of Gaza’s close to 2 million people.”

Palestinians wanting to avoid getting shot by Israeli Defense Forces need to stop attacking the border, plain and simple. A time out on the car bombs and knife attacks against Israeli citizens would be wise too.

If the belly gazers at the UN, NY Times, etc… truly cared about the Palestinian people, they would be calling for this too. They don’t though, because without Israel and now Trump to blame Middle East violence on, then the uncomfortable truth that eliminating Israel is the end goal for groups like Hamas would need to be faced.

Peace will not happen until this is reconciled.