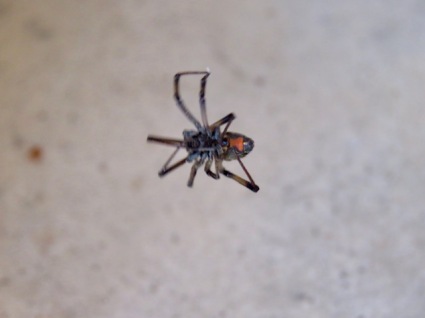 Female black widows attract prey by showing off their shiny, red hourglass markings. This lures their unfortunate victim directly in to her clutches, where it will soon be wrapped in mounds of silk before being injected with digestive enzymes that turn their insides to mush.  The spider then sucks the liquid out (gleefully, I like to imagine), leaving only a dead, hollowed out shell of what was once a living creation behind.

A person stamped with a victimhood mentality eventually becomes an empty shell too.  Except in this case it’s not the spider draining the life out of them, but Western society’s pathological need to be seen as compassionate and caring when tough love and common sense are required.  This in turn can cause them learned helplessness and  a continual reliance on other people and things in place of basic life skills.

The homeless crisis faced by many cities around the country is surely at the top of a long list of cultural issues effected by this dysfunction. This was brought to mind recently when I read this blog post by Chris Megison, President and CEO of Solutions For Change, a wonderful organization dedicated to ending family homelessness who I’ve blogged about before.

Chris uses the term symptom relief when discussing the Band-Aid approach federal and state governments have taken towards trying to solve homelessness.  In fact he doesn’t believe “solving” it is even part of the equation.  His words:

“It is very important to understand that the increase in homelessness and property crimes is happening by design, due to State of California’s legislative overreach that is handcuffing local cities.”

Chris is referring to something called Housing First, which fixates on providing housing for the homeless with no requirements that they stop drinking and/or doing drugs. This philosophy is poisonous according to Chris and because it’s permeated throughout the public sector some really bad policies and incentives have come about as he explains here:

“California’s homeless response system has done something that we believe is enormously dangerous. The state has systematized and operationalized codependency through a new design that provides taxpayer funded no-strings-attached drug housing for the homeless addict. The intervention they are using is a housing intervention with the misguided logic that the addict will decide, at some point, to get sober. The addict can now continue to use drugs in “free” government housing, commit property crimes to support their habit and have a place for other addicts to congregate.

Sadly, the same public sector architects of this design have also decriminalized possession of drugs, even hard drugs like heroin and meth.  A person caught with 3 grams of heroin (30 uses) is considered to have “personal use” and let go.  Police officers are going on record all over California, saying that we are in full blown crisis caused by the confluence of multiple government policies that focus on the wrong thing; they focus almost entirely on symptoms.”

Is it compassionate to provide free housing with no expectations that tenants behave like responsible human beings?  To release people caught with hard drugs because hey, they’re only harming themselves and who are we to judge anyway?  Or is it really just another way for politicians to look like they’re doing somethingwhen in fact they’re just making things worse?

And what about the homeless themselves, doesn’t this convey the message that they are incapable of overcoming their addictions and becoming productive members of society? That they are “victims” of forces beyond their control so let’s just give them housing and let them alone about their drugs so we can get back to our paper shuffling and say “see, problem solved!”?

The lure of being seen as compassionate is powerful and not in itself a bad thing.  When it becomes politicized and purely symbolic though it leads to greater evils than the initial problems being confronted.  In this case the devaluing of human beings and treating them as animals with no ability to help themselves.

This only propagates whatever dysfunction an already damaged population is dealing with, leaving a broken trail of carcasses ravaged by poverty, drug addiction and spiritual emptiness in its wake.

We need to rethink what we are doing to the most vulnerable among us.

For more information about the good work Solutions for Change is doing to empower people up and out of being homeless go here.

This entry was posted in Uncategorized. Bookmark the permalink.

33 Responses to When Kindness Kills