As we move on from Day 1 in this series of quotes from our Founding Fathers, we come to Samuel Adams, second cousin to John Adams and a major architect of the American Revolution and in helping to shape the political culture of the young country. 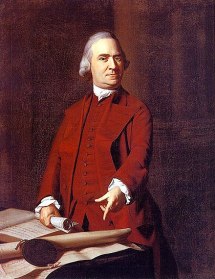 “If ye love wealth better than liberty, the tranquility of servitude better than the animating contest of freedom, go home from us in peace. We ask not your counsels or your arms. Crouch down and lick the hands which feed you. May your chains set lightly upon you, and may posterity forget that you were our countrymen.”

This quote holds particular significance for us today, as so many seem not just fine with the ever increasing amount of government interference in our lives, but eagerly demanding it.

Government is force of the most powerful kind. It has complete authority to legally threaten and initiate violence against its own citizens, with a vast army of officers empowered to use various methods of enforcement, up to and including the lethal type.

Nobody believes we don’t need government, it’s a necessary evil that exists to protect our rights and enforce laws that allow a free people to prosper and thrive.  We should be very wary however of the powers we grant to it.

This brings to mind another quote by Gerald Ford, often wrongly attributed to Thomas Jefferson, but still no less true.

Or more simply, be careful what you ask for….

18 Responses to The Birth of Liberty-Day 2