Jerusalem is an intense place. Its people, history and the blending of cultures as different as night and day brings about a palpable energy that leaves you both charged and exhausted. It’s also more than a little overwhelming to realize your feet are walking some of the same roads Jesus did during his time on earth some two thousand years ago. I know, wow!

Whether you’re a believer or not it is hard not to ponder the historical accuracy of the Bible when touring so many archeological sites that back up its teachings. The city of King David, Herod’s Palace, the Last Supper room, Jacob’s Well, the Pool of Bethesda; these and numerous other places all existed and you can actually view the ruins. 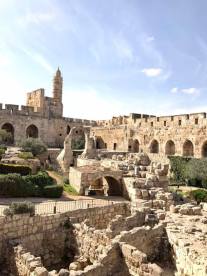 One might even go further and say that the symbolism of the Temple Mount, the area where King Solomon built the Temple of the Lord and one of the holiest sites in the Old city; and the Dome of the Rock, a Muslim shrine built on top of it, explain much of the world’s turbulence since it began.

Regardless, most everyone agrees that being inside the walls of this ancient city brings about a level of conflicting emotions that’s difficult to convey.  The Church of the Holy Sepulchre for example, built over an area where Jesus was said to have been crucified and then rose from the dead, is similar to what I would imagine being stuck in a wind tunnel with opposing forces coming at you at lightning speed is.

The sacredness and holiness of it all brings an uncontrollable awe and reverence, yet you’re among hundreds of frenzied people, pushing, chanting, praying and certainly oblivious to any sort of love your neighbor sentiment. Emotions run high and tempers short, yet the raw devotion and universal yearning for hope being expressed is a beautiful thing to witness.

Inside Church of Holy Sepulchre

Praying over slab where Jesus’s body was laid. 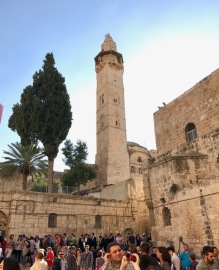 Church of the Holy Sepulchre

The Jewish people too are an anomaly.  What comes off at first as a brusque roughness in demeanor, quickly turns to warmth and helpfulness as you get to know them.  As an Israeli friend of mine put it, “We don’t like to waste time with filters, we respect you enough to speak plainly.”  Coming from America, Land of Walking on Eggshells, this can take some getting used to but it was refreshing.

Fiercely patriotic and extremely knowledgeable of their country’s history and Jerusalem’s significance to it, the Jews are keenly aware of their vulnerability as a people who have faced continual persecution.

My visit there has convinced me more than ever that you can’t fully comprehend what’s going on in the the world unless you understand the formation of Israel by God, the designation of its people as chosen and the importance of protecting them from extinction.  How the World treats Israel is a direct reflection of it’s spiritual and moral health, which could use some help right now.

This entry was posted in Uncategorized. Bookmark the permalink.

24 Responses to Thoughts on Jerusalem